Elora Gorge fishing can be excellent and you can use these tips some top river guides to help catch even more fish. I have been fishing the Elora gorge and guiding it for about 20 years and I have many guide friends that also fish the Elora Gorge and these are the methods that we use.

The Elora Gorge is well known for its brown trout fishery but there are other species like pike, smallmouth bass, rainbow trout, walleye, catfish, and carp that inhabit the waters of the Elora Gorge.

The Elora gorge is as scenic as it gets for rivers in Southern Ontario and it can fish well from the opening day of trout which is the 4th Saturday in April until September 30th.

If you are a pike or bass angler you should check the fishing regulations as these species open to fishing later and might close later in the year.

The Grand River is stocked annually with about 20 to 30 thousand brown trout that are around 6 to 8 inches long. The stocking takes place in a 30 kilometer stretch of river from Belwood Lake in Fergus to Westmontrose which is downriver from the Elora Gorge.

The Elora Gorge is usually stocked with a couple of thousand brown trout which are put in at the top of the gorge, in the middle, and near the bottom of the Gorge so there is plenty of trout spread out throughout the gorge.

There are times when catching over 20 trout a day is possible and there are many big brown trout around.

The river in the Elora Gorge can also be deep and fast and that allows those brown trout to reach sizes of up to 30 inches or 10 pounds.

Anglers should be very cautious wading in the Gorge since the water can be fast and there are fast drop-offs that can go from a couple of feet deep to well over your head.

Water temperatures over 68F / 18C are when trout become inactive and it’s also when the trout can be stressed out when hooked and they can even die.

Anglers fishing the Elora Gorge will find fast water stretches, shallow water, and some big deep pools and the brown trout will be in all of those spots. Even some of the biggest brown trout can be caught in water less than knee-deep.

The best methods for Brown trout fishing in the Elora Gorge are Float fishing, Fly fishing, and spin fishing with lures.

Fly fishing is often the most popular method for fishing the Grand rivers. Flies like nymphs and streamers are great to get down to the big brown trout. I like Pheasant tail nymphs, Caddis Patterns, Isopods, and cranefly nymphs like the Walts worm.

Streamer are great for getting those really big fish that want a big meal. Streamer like Muddler Minnows, Zoo Cougars, Bunny Leaches are all good choices.

The Elora Gorge has a lot of aquatic insects so dry fly fishing on the surface can be great at times. Flies Like the Elk Hair caddis, the Usual, the Mark Brown, and the Adams are good choices, but for the more serious anglers, it’s best to match the hatch and use a grand river hatch chart.

If you are interested in fly fishing make sure you have the right fly fishing gear for this area which you can see at Fly Fishing Gear For Beginners: Everything You Need.

Float fishing with a spinning reel or even a Centerpin reel can produce lots of brown trout and some big ones. For more on float fishing methods check my page Float Fishing In Ontario – When, Where, And How.

There is a local fly fishing store in town and a Canadian Tire store for anglers to buy fishing gear.

Lures can be very effective at catching the brown trout in the Elora Gorge and using the right gear can make a big difference.

If you want to fish the Elora Gorge with lures, check out my page best lures for river fishing.

If you want to learn how to catch the most and biggest fish in the grand river check my page Grand River Fishing Guides – Ontario’s Best.

At this time (2021) there are no special fishing regulations in the actual Gorge, however, there is what is known as the low-level bridge downriver of the Elora Gorge and downriver of this bridge is a single barbless hook only and a no-kill zone on trout.

There is some big smallmouth bass in the Elora Gorge and anglers fishing the Elora Gorge will fish them in the bigger pools and in the slower sections of the river or anywhere that there is little to no current.

You could float fish for them but lure fishing with spinners, crank baits and jigs are a great way to catch them.

It’s best to fish for the bass later in June through to the end of September.

Fishing The Elora Gorge For Pike

I have seen pike in this section that are over 15 pounds. The pike often reside in the deepest pools and are found in sections with little to no current.

When fishing for pike in the Elora gorge try spoons, spinners and crankbaits and pay close attention the edges of the river near deep water.

Pike fishing can be good from late may to the end of September.

Fishing The Elora Gorge For Walleye

Walleye is somewhat of a new species for this section of the Grand River but after about 10 years of stocking near the Elora Gorge there is now a decent population of Walleye.

Some anglers are reporting a dozen walleye a day and some are now over 5 pounds.

Anglers fishing the Elora Gorge will find the walleye and the deeper holes and they will stay close to the bottom and under the current.

Anglers are doing well with jigs and deep diving crankbaits.

Walleye fishing is best from mid May until the end of September.

There are days when you will be able to catch many big fish when fishing the Elora Gorge but the key is knowing where to go and what to use.

If you bring the right equipment and the right bait, and you stick to fishing the deeper pools and the fast water runs at the right time of year you will greatly improve your chances for success.

If you want to catch the most fish in the Elora Gorge and in other rivers around Southern Ontario, consider hiring a guide from A Perfect Drift Guide Company to show you how the experts do it. 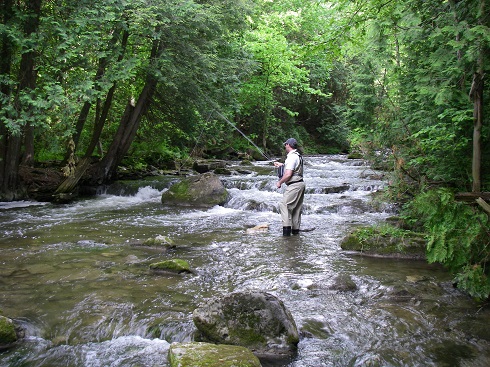