Your resource for fishing the rivers of Southern Ontario

River Fishing in Ontario, Great or Not!

Find out what the status is and how we can improve river fishing for everyone.

Going back 6 or 7 years ago ( 2011 to 2014), river anglers in Ontario experienced some pretty great fishing. We were spoiled and we got a glimpse of how great our rivers can actually be.

I saw more 20 inch brown trout in one season then I usually see in 3 years and we had more 20 to 30 steelhead days than I thought possible. My Clients were catching an average of 12 to 16 big steelhead a day, almost everyday. For over 2 months between late October and December was like I’d died and gone to steelhead heaven. The hardest thing for me those years was dealing with chapped dry, very cold and even cut fingers from releasing so many fish so often. As a guide, that was a problem I’d like to see every year!

But then something happened and things started to change. As some of you Ontario great lakes anglers may have noticed over the last few years there seems to be a significant decrease in the numbers of trout, steelhead and salmon in our rivers. Where did they go?

In fact I’ve been hearing the same thing all around the great lakes region the last few years. There has also been more anglers out fishing than ever despite less fish and low water.

And now, worms on the ground, some trees are budding and some steelhead are in full spawning mode, and its only the end of February 2017 as I write this.

What is the reason for the lack of fish and the increase in anglers, and what can you and I do help bring back our rivers to their maximum potential?

Possible reasons for rivers in decline

One of my biologist friends suggested that during those peak good years we were coming off a few years of colder and wetter than normal summers combined with some milder winters and that those types of conditions are great for the survival of baby steelhead, salmon and resident trout. The results of those cooler summers was more and bigger resident trout, and more returning steelhead and salmon.

But unfortunately the last few years we’ve seen earlier springs with longer dryer summers, very little rain in the fall along with one really long cold winter, All of which is wreaking havoc on all those resident trout and baby steelhead stuck in the rivers during those extreme conditions.

That could be why there’s less fish now and judging by the worms and the budding trees in February this trend could continue, but don’t worry just yet.

HOW TO IMPROVE RIVER FISHING

I’ve heard it said a few times that we, as anglers cant do anything to control the weather and even though that’s true, there are some simple, easy and cost effective ways that we can help out and possibly make the river fishing in our area better, despite the increases in population, pollution, and a warming environment.

First, we are all recycling and turning off the lights to conserve energy, right? And as my kids remind me all to often, conserving water is also very important.

But that’s all stuff we as a society should be doing now anyways and it should be routine by now. So what else can we do directly to make our river fishing better?

If you want to see more fish in the river for many more years to come we need to make sure our waters are clean, cold , accessible, managed properly and that our water is protected and being used wisely. As an avid angler who loves our rivers I have been working with a number of Conservation Authorities, fishing groups and with Trout Unlimited Canada to do exactly that. These groups put pressure on our government services to maintain water quality, maintain and improve fishing through stream monitoring and restoration projects, protect our waters from commercial and industrial uses, increase access and are the voice of Ontario river anglers.

But they need your help because the more people backing them the more they can do to protect, maintain and improve our rivers and the faster we can get our rivers fishing at their full potential again.

Last year I had the pleasure (and it was fun) to help a group of volunteers plant over 1000 trees and shrubs along the banks of the upper Credit River.

Hopefully the results of this will mean lots more little brook trout in that area and a healthier, cooler river for miles down stream that will result in more brown trout, steelhead and salmon in the near future.

Trees are very important to fish! In a nut shell trees provide shelter for the animals and the adult mayflies and other bugs the fish feed on. The leaves and other parts of the trees fall in the water adding nutrients for the water vegetation and the insects which baby trout and salmon feed on.

Trees and shrubs provide shade and shelter which can help keep the water cooler and maintain higher oxygen content and provide cover for fish. Trees can also slow and prevent run off, silt build up, and help stabilize the river banks, all good things for the little and big trout and salmon, especially on those hot summer days. We need more trees! It only takes 1 or 2 hours of your time to plant a couple dozen trees or more and if hundreds or thousands of Ontario river anglers donated at least 1 or 2 hours each year, our rivers would improve faster then our warming environment could damage them.

There are a lot of great organizations out there that you can volunteer your time with. There are lots of good rivers around Toronto. Look up your local Conservative authorities and see if they have volunteer tree planting days.

Go on-line to Trout Unlimited Canada, Friends of the Grand, Izaak Walton Fly Fishing club, Ontario Streams and the many other great fishing groups and clubs around Southern Ontario to see if there’s a way for you to volunteer your time to help bring your favorite river back to it’s maximum potential.

Even if you cant plant some trees or volunteer your time, just joining these groups is enough to help because with more numbers and more support these groups have more influence and more money to make the positive changes needed for better fishing.

As a side benefit to donating my time with a few of these groups , not only did I feel great that I’ve been giving back to the rivers, but I’ve also met some good friends and contacts that have shared their priceless fishing knowledge with me.

Did you know that guys that regularly contribute to these clubs are often better anglers due to the fact they are far more knowledgeable from all the shared techniques and fishing spots their new friends share with them.

You can’t buy that kind of knowledge and it’s free when you help make your river better.

CATCH AND RELEASE IS THE KEY

Another very simple and easy way to improve our rivers is simply to practice catch and release and spread the word. Until our OMNR (fisheries management)  gets smart and implements catch and release zones or slot limits on more or even all our trout rivers, I believe the fishing will continue to suffer and we will never see the full potential of our rivers. Catch and release and slot limits are scientifically proven to work and we need them here, and soon. Anglers catch big trout and that trout ends up in a frying pan and not spawning and improving are fishery. Our rivers are to fragile to sustain this type of abuse and anglers need to re-think this old mentality.

Many of the designated USA world class or trophy trout waters are catch and release or have slot limits in effect, and believe it or not, many of these rivers have way, way, better fishing then the vast majority of our trout rivers do now, at least the ones I’ve fished were much better, and not because the rivers were cleaner, simply because they are better managed!

So with an ever increasing population, increased pollution and a warming environment, catch and release is more important now than ever before and the groups and clubs mentioned above are the needed voice to make these changes happen.

THE GOOD AND BAD FISHING CYCLE

Unfortunately, those few years of great fishing also meant lots of great pictures of trophy sized fish, lots of word of mouth stories and lots of social media posts from hundreds or thousands of anglers. The results of that is many more anglers wanting to get out onto the rivers to fish. With increased anglers it means more harvest and when combined with already lower numbers, harsh weather conditions, pollution and more water usage that the fish are faced with, that’s a combination for a river fishing disaster.

Increased fishing pressure in Ontario shouldn’t even be a problem considering we have hundreds or thousands of miles of rivers to fish and if everyone released fish fishing could still be better. The problem of crowding only exists because of limited access, combined with small sections of rivers open to year round fishing and short open seasons.Again poorly managed and old school thinking. River all over the USA are open year round with special regulations and have great fishing still.

All of these issue can be addressed by joining and supporting some of the fishing clubs and groups above that have already worked with the OMNR to increase river access for anglers and have implemented catch and release sections providing anglers with trophy sections that could be considered work class fishing.

But, more can and needs to be done and with your help, your voice and your support it will get done.

Just by simply supporting your local club with your time or your membership money and releasing all your fish and spreading the word, we could start seeing our rivers going back to their full potential again, instead of the steady decrease in fish we are seeing now.

Now is the time to act, it doesn’t cost much, and it doesn’t require a lot of time and effort, but a little goes a long way when thousands of people get together for one great reason. Some of the organizations that help with stream rehabilitation and tree planting.

THE BEST CLUBS TO JOIN

Don’t forget to check out our Best Products page to help you figure our what you might be missing.

Bass Pro Shops is the leader in everything fishing gear related. There have a huge selection of river fishing gear and great prices. 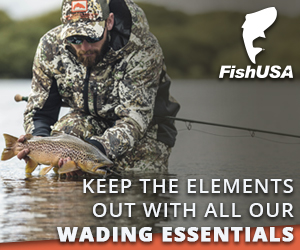 FishUSA is one of the best places that I know of to get river fishing gear that is relevant to the great lakes area, and they often carry a larger selection of river fishing gear then any other online shop. If you haven’t seen what they have to offer you should check them out.

If you are local to Ontario then this is a great place to order your Centerpin and River fishing gear!